And no wonder - even in these days of big lottery jackpots, the El Gordo Christmas lottery makes all the others look like a lucky dip at the local school fair! 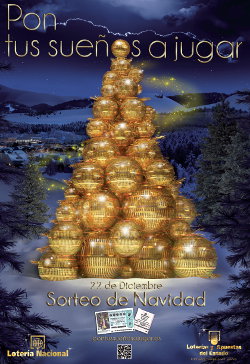 The prize pot is always in billions of Euros... yes, BILLIONS! The 2016 Christmas draw paid out a stunning €2.24 Billion.

And for 2017 is set to pay prizes totalling an incredible €2.4 Billion. Insane.

But that's NOT the most exciting thing about this game! Even better is that there are far more jackpot prizes than any normal sane lottery draw.

Here you get not one, but literally hundreds of jackpots! These are just the bigger prizes for this year:-

All this giving a total of over 2.75 million actual prizes paid out. Plain nuts - which is why Spain loves this draw so much. 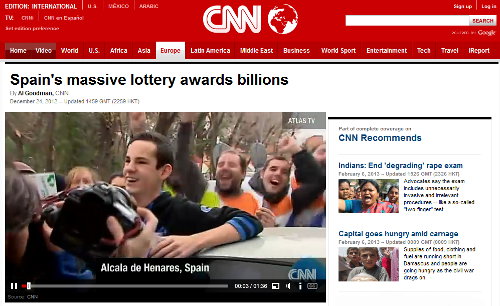 NOTE: If you want to play, the easiest way by far, outside of Spain, is online. Our recommendation for this year is this well established website (they've been around for over 15 years now!). It's way cheaper than most of the online ticket services. And since they've been doing this since 2002, a lot more trustworthy too!

The actual draw for El Gordo brings Spain to a stop each Christmas. Every bar and living room with a TV is surrounded by excited Spanish people clutching their tickets.

It makes odd viewing the first time you see it. But the draw is conducted according to a tradition getting on for two hundred years old now.

Small wooden balls are drawn from two large golden cages. The larger one contains all the possible numbers from the draw, and the smaller the actual prizes they win. So a number is drawn, and then the prize that number wins.

(You can imagine the heart stopping moment when your number is drawn, and then you wait to find if you won a thousand Euros or a few million!)

As you can see in this brief video, the draw is conducted with help from the children of San Ildefonso school in Madrid. They take it in turns to draw balls and then sing out the winning numbers and the prizes. This whole process goes on for an amazing 3 hours, avidly watched by the 98% of Spanish people who play every El Gordo Christmas lottery draw.

To continue the 'unusual' theme... as the video shows, specific 5 digit numbers are actually drawn from the machine. This lottery works using a large number of 5 digit balls, instead of e.g. 1 to 49 like most lotteries.

There is some room to pick preferred numbers, depending on what is still available. But some numbers are apparently reserved and passed down through generations of families!

There is also a limited supply - so each number only appears on ten tickets. Making certain numbers even more treasured by the very superstitious Spanish people.

And You Can Buy Part Of a Ticket...

Each ticket can actually be broken down into 10 'decimos'. Kind of like a sub-ticket. So you can buy just one decimo or 10 if you want the whole ticket. Prizes are split between all holders of the decimos for each numbered ticket.

Outside of Spain it can be tricky to get tickets. Especially at a fair price, where most online sellers are more than happy to charge up to 5 times (or even more) than the normal ticket price! This is partly helped by the more complicated ticketing system, where many players are not entirely sure what they are buying.

Charging extra is of course fine, within reason, as there are costs to cover. So always look closely at what you are getting for your money (a single decimo normally costs about €20 in Spain). Or play in a reliable Spanish lottery syndicate where you can be sure you get the expertise, and typically much better value for money.