If you're going to play the Australian Lottery in a syndicate, you want to make sure you get the best bang for your bucks. But sadly lottery syndicates seem very rare in Australia itself. 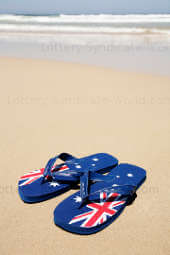 There are five lottery corporations that cover Australia as a whole. They share prize pools for bigger jackpot prizes across the main games - these being TattsLotto, Oz Lotto and the Australian Powerball.

But each corporation also runs games available to that region only too.

Australians love their lottery games in general, with around 6.8 million Aussies playing regularly - almost a third of the population.

OzLotto is a weekly Tuesday night draw with Jackpots often in the region of $2-$3 Million, but sometimes reaching as much as $10 Million (but can go even higher). When there are no Division 1 winners it 'jackpots' (or 'rolls over') to the next draw.

In this game there are 45 balls, numbered 1 to 45, from which nine selections in total are made. The first seven are 'winning numbers', and the next two 'supplementary numbers'. It costs $1.30 per play.

TattsLotto is a weekly Saturday night draw offering a guaranteed jackpot of $4 Million - with occasional 'Superdraw' events providing jackpots up to $20 Million. (Note: this is also basically the same game as the 'Gold Lotto' played in Queensland)

There are 45 balls, numbered 1 to 45, from which 8 selections are drawn. The first six are 'winning numbers', and the next two 'supplementary numbers'. An Australian Lottery player picks 6 numbers, and winning combinations are split over 6 'divisions':

The Powerball is the most popular Australian Lottery game, not surprisingly given the large prize pool available. There is a guaranteed Division One prize pool of at least $3 Million every Thursday night, but jackpots can reach as high as $50 Million.

The game structure was changed in April 2018. Previously players picked 6 numbers from 40 instead of 7 from 35. This actually made the game significantly harder to win the jackpot, as the odds lengthened from 1 in 76.7 million to 1 in 134 million.

Prizes are awarded according to 9 'divisions':

17 Aug 2018: After a record breaking 2 month run of rollovers a $100 Million jackpot has been split between two players (from Sydney and Melbourne).
1 Apr 2018: Australian Powerball game structure changes to a game of 7 from 35 plus 1 from 20.
28 Oct 2017: It's a Superdraw special for the Saturday Lotto - a guaranteed $21 Million Division One prize.
16 Jul 2017: Oz Lotto grows to an impressive $50 Million Division One prize.
12 May 2017: An unemployed man from Sydney walks away with a $50 Million payout.
5 Jan 2017: A Queensland based syndicate wins the $55 Million Powerball jackpot. Each winner receives $2.62 Million.
3 Sep 2016: It's Superdraw time for the Saturday Lotto game with another $21 Million jackpot up for grabs.
10 Nov 2015: That record jackpot is looking at risk of being beaten - as Powerball rolls over to reach $70 Million.
30 Oct 2014: It's Superdraw time once again. This Saturday's Oz Lotto will be $21 Million.
30 Jul 2009: The Aussie record jackpot smashed with 2 players sharing an $80 Million on Powerball.
30 May 2008: Australian Powerball Jackpot Largest Ever
1 Jul 2004: Watch our for this Australian lottery scam

Closed Syndicates (for reference only):