The Spanish 'El Gordo' is one of the craziest lottery games in the world. This once per year Christmas draw brings all of Spain to a full stop.

Here's a sneaky undercover 2 minute video from behind the cameras during the draw - even the buzz in the studio is mad:-

And if you're wondering what's happening in the video. And what that strange noise is... welcome to the lottery 'El Gordo' style!

The action in the background on stage is the draw itself taking place. You can see 2 school children picking up the numbered ball that has come out of the machine.

That sound is them singing the winning numbers out.

Especially when you consider the giant draw machine you can see has 100,000 numbered little wooden balls in it. One for each ticket number available. It's more like a raffle than a typical lottery game because there are only limited numbers of tickets you can buy, each pre-printed with specific numbers.

There are TENS OF THOUSANDS of prizes to be awarded. HUNDREDS of those are actually jackpot prizes!

Each prize amount is also on another wooden ball. In another giant draw machine.

So they actually draw a ball for the winning number. Then they draw another ball for the prize that number wins.

And all done one-by-one with the pairs of children picking them up and carrying them over to the officials. Whilst singing out the numbers.

Actually about 3 hours in total. And Spain not only love it, but they stop what they are doing and watch the whole darn thing. It's a national institution. You're not Spanish if you don't play the Christmas draw!

Just a quick word on those prizes.

I already mentioned there is a prize fund of €2.24 BILLION (not mere 'millions' folks!). But here are just the top prize tiers:-

How crazy is that? There are 360 prizes big enough to be the jackpot for any other regular lottery. There is no other game like this!

Just one more statistic to prove how plain faced crazy this whole game is. There are more than 2.75 million prizes. Yes, when all is said and done, the officials will have paid out prizes to more people than the entire population of Jamaica.

So it's no wonder this once a year Christmas draw is one of the few lottery games known to players worldwide.

Why 'El Gordo'?
Literally translated, it's Spanish for 'the fat one'. Now you can understand why it has this affectionate name.

How To Buy El Gordo Tickets?

If you want to play, you can buy tickets online. But you need to watch out for the ticket sharks.

And first you need to understand how the normal pricing works in Spain.

So how much are El Gordo tickets? They're basically €20 each.

But you need to understand that a €20 ticket is actually a 'decimo', or a tenth of a ticket. Each numbered ticket is split into 10 smaller tickets, each with the same winning number. 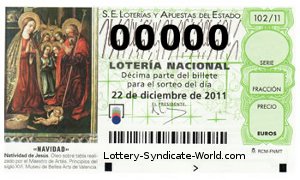 These have to be the best looking lottery tickets around. In fact, the old tickets are considered quite collectible in Spain.

Where Can You Buy El Gordo Tickets For This Year?

Officially, only in Spain from a licensed ticket seller.

But lots of places online too. You do need to watch those prices carefully though because it's not unheard of for charges to be as high as 7 times, or even more, than the normal ticket price! There are also a lot of dubious operators that have sprung up over the last couple of year.

This one is my recommendation for 2017 tickets - it's one of the best prices online. Plus the company have been around for 15 years, so are very well trusted.

Or if you prefer a syndicate option, then you can find reviews for the best Spanish lottery syndicates here.

The Spanish lottery 'El Gordo' is quite honestly a crazy game with a high ticket price, but it is only once a year. And it only costs about as much as most premium lottery scratch cards.

I always think it's worth a shot, just for the fun of it. See you in crazy town ;-)